Try one of our other Upcoming Events:

August 24 – Walk Off The Earth IN CONCERT AT THE BADLANDS AMPHITHEATRE

JANN ARDEN is a singer, songwriter, broadcaster, actor, author and social media star. The celebrated multi-platinum, award-winning artist catapulted onto the music scene in 1993 with her debut album, Time for Mercy, featuring the hit single “I Would Die for You.”

A year later she had her international break-out hit “Insensitive.” She has written four books, the most recent being the Canadian bestseller Feeding My Mother- Comfort and Laughter in the Kitchen as My Mom Lives with Memory Loss. She is much in demand as a public speaker, and a favourite frequent guest on CBC’s Rick Mercer Report and a guest host on CTV’s The Social. Jann’s most recent recording “These Are the Days” released in March of 2018. Once again Grammy Award winning producer Bob Rock was behind the console of what could arguably be, Jann’s most personal and poignant offering to date.

Whether she is captivating audiences with her heartfelt music, entertaining them with her quick wit or sharing her written word in a boldly honest voice – Jann Arden is a Canadian original – a brilliant multi-dimensional talent!

Arden is joined by opening act Nuela Charles, known for her soulful vocals and captivating stage presence, and nominated for the 2019 Juno Adult Contemporary Album of the Year.

A $7 Ticket Fee and GST will be applied. Parking is available for $7 in advance and $10 at the door.

The performance goes rain or shine. Tickets are non-refundable. Cancelled performance, due to severe weather, will result in a non-profit tax receipt to the purchaser, for the ticket price. Online, limit of 8 tickets. 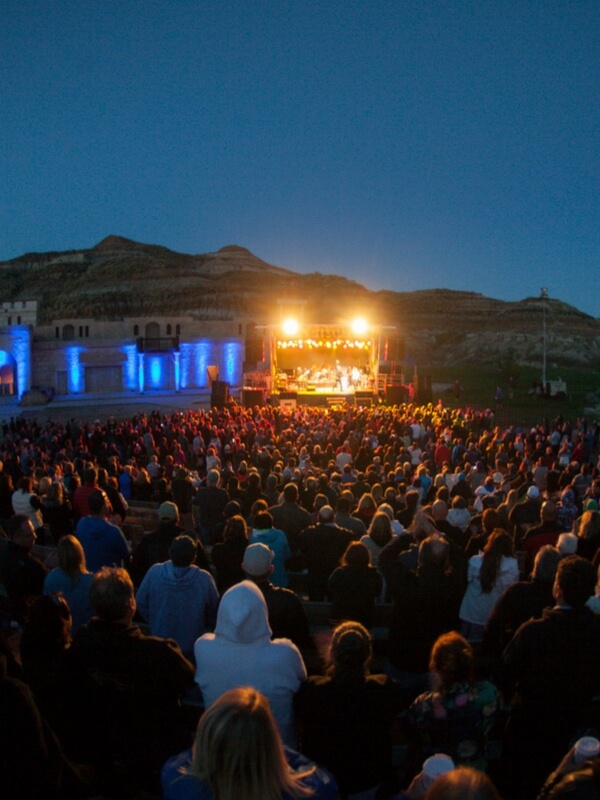 “A SPECTACULAR PLACE FOR A CONCERT”

There’s nothing like a concert at the Badlands Amp (Drumheller, Alberta). Our natural amphitheatre has great sight lines, clear sound, and incredible views of our surrunding hills
all under a big Alberta Sky.